Fire Testing - Does this comply with a fire or flammability test?
Skip to content

Fire testing is an integral component of building and consumer product regulations in the United States. Essentially, a fire test involves exposure of a material, product, or assembly to a particular ignition source or thermal insult. Pass/fail criteria are then established based on flame spread rate or distance, heat release rate, temperature, etc.

A large number of fire tests are used in the United States and a commonly asked question is "Does this material/product comply with the relevant fire or flammability test?" We can identify what that relevant fire test is, and then conduct fire testing to answer that important question. For example, in buildings, hourly fire resistance is determined by ASTM E119, "Standard Test Methods for Fire Tests of Building Construction and Materials"; flammability ratings of wall and ceiling linings are determined in accordance with ASTM E84, "Standard Test Method for Surface Burning Characteristics of Building Materials"; flammability of textiles and films is determined in accordance with NFPA 701, "Standard Methods of Fire Tests for Flame Propagation of Textiles and Films". Motor vehicle interiors are tested per Federal Motor Vehicle Safety Standard 302 (FMVSS 302). The Consumer Product Safety Commission (CPSC) promulgates fire testing standards for mattress flammability (16 CFR Part 1633), flammability of clothing/general wearing apparel (16 CFR Part 1610) and children's sleepwear (16 CFR Part 1615/1616). Even NASA has its own fire test (NASA Standard 6001, Test 1 + 2). 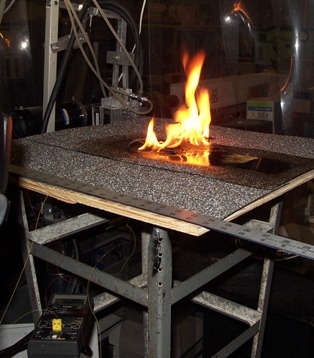 In addition to providing answers to regulatory questions, fire testing can also be an important aspect of forensic fire analysis and reconstruction. There are two primary categories of fire testing or flammability testing relevant to fire safety "bench-scale" fire tests and "real scale" fire tests.

A bench-scale fire test is conducted on a laboratory bench. Bench-scale fire tests are relatively inexpensive and usually require a short lead time. One of the most widely used bench-scale fire tests is the Cone Calorimeter (ASTM E1354) where a 4 inch by 4-inch material sample is heated and burned, and its combustion products are collected and analyzed. This fire test produces Cone Calorimeter "curves" of heat release rate, smoke production rate, and other quantities that provide insight into a material's overall flammability. However, interpretation of these curves is not straightforward and requires expertise in combustion and flammability.

Cone Calorimeter (or similar fire test) data can also be used to estimate "material properties" of combustible solids, which are required by pyrolysis models to characterize a material's overall reaction to fire. These material properties serve as input to fire growth simulations that analyze how fires develop and spread by allowing computer fire models to calculate how solid combustibles ignite and burn. There are no standardized (or even widely-recognized) procedures for material property estimation, but Reax Engineering personnel are leading experts in this developing application of fire testing.

In comparison to bench-scale fire tests, which require only small-scale material samples, real scale fire testing involves burning full-size objects or mockups. By placing a burning item under a large hood that is instrumented with sensors (sometimes called a furniture calorimeter) the amount of heat and smoke that a burning fuel package produces can be directly determined. This information can then be provided as input to a computer fire model to help establish the fire timeline. Compared with bench-scale fire testing, a real scale fire test is more expensive and usually has a longer lead time; however, it can provide a wealth of information regarding large-scale fire behavior. 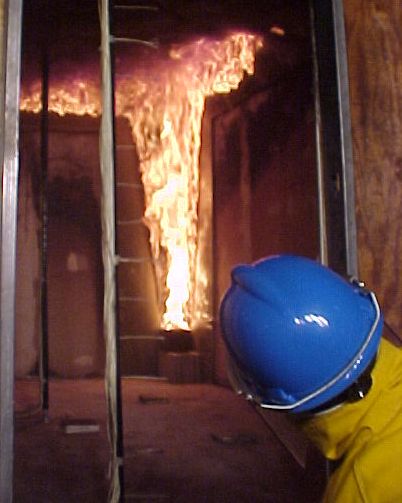